Saigon, South Vietnam (JFK+50) On January 30, 1968, Communist forces launched the largest offensive of the Vietnam War.  Many towns and military bases were attacked including the United States Embassy here in Saigon.

The attacks came during the TET holiday* and were made by 80,000 North Vietnamese and National Liberation Front** forces.

According to the National Geographic Society, the TET offensive was a major turning point in the war.  Although the Communists suffered a military defeat in the end, they won a "stunning propaganda victory."

January 1968 marked a high point in popular support for the war in the U.S.  That would steadily decline during the course of the three phases of the TET offensive***.

*TET holiday is one of the most important celebrations in Vietnamese culture.  It means 'Festival of the First Day of the Year,' & is celebrated with fireworks & family gatherings.

**NLF was a Vietnamese political organization formed in 1960 to achieve the overthrow of the government of South Vietnam.  The military arm of the NLF was the VC or Viet Cong. 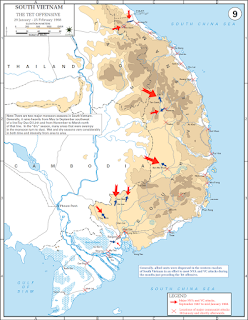 This work is licensed under a Creative Commons Attribution-NonCommercial-ShareAlike 3.0 Unported License.

IN MEMORY OF RAY F. WHITE

UNCLE RAY,"Dad,The Tomato Man,"the inspiration for JFK+50, died on May 9, 2012 at the age of 98. On his daily posts, Dad wrote...
"Time is so precious--do not waste it living for yourself but give a little of your time to others."