Washington, D.C. (JFK+50) On September 20, 1921, Carter Field of the New York Tribune learned that President Warren G. Harding is "convinced that an aroused public opinion will have its effect on the armament limitation conference," so he "intends to issue a proclamation and will make the day {Armistice Day*} a virtual, if not a legal, holiday."

On November 11, the President and the Cabinet will go to Arlington National Cemetery to observe the burial of America's "Unknown Soldier**," who died in France during the late world war.

*Armistice Day, November 11, marks the signing of the armistice in France for the cessation of hostilities on the Western Front of WWI. AD became Veteran's Day to honor military veterans of all conflicts.

**The WWI Unknown Soldier is a recipient of the Medal of Honor, the Victoria Cross and other high awards.  He was interred on Nov 11 1921 below a 3 level marble tomb. 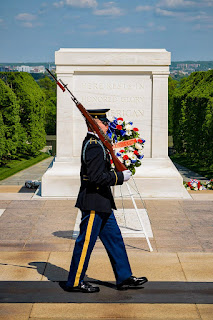 A TRIBUTE TO JFK BY THEODORE H. WHITE

"He made Americans realize that they were a young people--& youth is hope. In his brief moment, he had given America belief, as well as hope."
From The World Book's 1964 Yearbook Special Report

IN MEMORY OF RAY F. WHITE

UNCLE RAY,"Dad,The Tomato Man,"the inspiration for JFK+50, died on May 9, 2012 at the age of 98. On his daily posts, Dad wrote...
"Time is so precious--do not waste it living for yourself but give a little of your time to others."